The two leaders also agreed to have an in-person meeting in February in Beijing.

The virtual meeting, the second of its kind in 2021 and the 37th meeting between Xi and Putin since 2013, covered a wide range of topics including democracy, joint pandemic response, bilateral trade, energy cooperation, and the Beijing Winter Olympics.

“The frequent interactions and solid friendship between the two heads of state epitomize the close ties of the two countries,” said Sun Jingxin, an expert with the Academy of Contemporary China and World Studies.

Xi praised Putin for having firmly supported China in upholding core interests and having rejected attempts to sow discord between Russia and China.

The Chinese president also said he expects to meet Putin in February when Putin will visit China and attend the opening ceremony of the Winter Games.

“Through this concrete action, you show support to China in hosting the games,” Xi said, adding that it will be the first in-person meeting between them in two years.

Xi said he looks forward to having in-depth discussions on bilateral relations and major international and regional issues, and believes more new, important common understandings will be reached.

Reaffirming Russia’s consistent opposition to attempts at politicizing sports, Putin expressed his hope of having an in-depth exchange of views with Xi on major issues of mutual interest to promote the sustained and high-level development of bilateral relations.

During Wednesday’s meeting, Xi lauded China-Russia relations for “emerging from all kinds of tests to demonstrate new vitality.”

The two sides have officially announced the renewal of the Treaty of Good-neighborliness and Friendly Cooperation and made it more relevant in the new era, extended firm mutual support on issues concerning each other’s core interests, thus defending the national dignity and common interests of both countries, Xi said.

Practical cooperation has also been a highlight, with bilateral trade in the first three quarters of 2021 exceeding 100 billion U.S. dollars for the first time.

The two countries have actively fulfilled their responsibilities as major countries, promoted a united, global response to COVID-19, communicated the true meaning of democracy and human rights, and acted as the bulwark of following true multilateralism and upholding fairness and justice in the world, Xi added.

Putin said that the Russia-China relationship is at its best in history with a high degree of strategic mutual trust.

It can be hailed as a model of state-to-state relations in the 21st century, said the Russian president.

Ruan Zongze, executive vice president of the China Institute of International Studies, said the essence of this “model” relations lies in mutual respect, fairness and justice, and win-win cooperation.

“It is important to have this kind of back-to-back cooperation in dealing with challenges in the international arena,” Ruan said.

Faced with hegemonism and external interference, China and Russia will surely join hands to safeguard fairness and justice in international relations, Ruan added.

During the meeting, Xi bashed “certain forces in the world” for trying to meddle in the internal affairs of China and Russia under the pretext of “democracy” and “human rights” and grossly trampling on international law and universally recognized norms governing international relations.

China and Russia need to launch more joint actions to uphold the security interests of the two sides more effectively. Efforts must be made to firmly reject hegemonic acts and the Cold War mentality under the disguise of “multilateralism” and “rules,” Xi said.

The Chinese president said the two countries should also strengthen their joint pandemic response, in areas such as COVID-19 testing and vaccine and drug R&D.

The two sides need to build on their traditional energy cooperation, pursue more cooperation in new energy, advance the cooperation package in nuclear energy, and explore new cooperation areas such as renewable energy, he said.

Exchanging views with Putin on democracy, Xi said that democracy is a lofty aspiration and common value of all humanity and also a right enjoyed by people of all countries.

“Whether a country is democratic or not and how to better realize democracy can only be left to its own people to decide,” Xi said.

China will enhance communication and coordination with Russia to encourage the international community to take the right view on democracy and defend the legitimate democratic rights of all countries, he added.

Putin said Russia is ready for more communication with China on defending true democratic rights and interests of all countries.

Russia will be the most staunch supporter of the Chinese government’s legitimate position on Taiwan-related issues, Putin said, adding that his country will firmly oppose moves by any force to undermine China’s interests using Taiwan-related issues, and moves to form any type of “small groups” in the Asia-Pacific region.

“No attempt to sow discord between Russia and China will ever succeed,” said the Russian president. Enditem 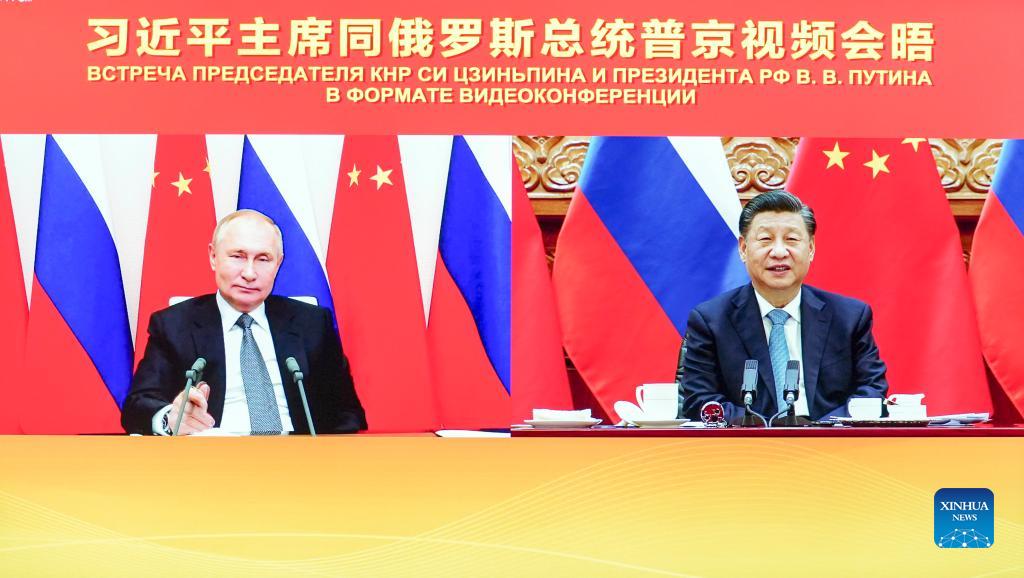